Janie Burkett was raised in a quiet town in Oklahoma. She was a pastor’s daughter with a happy childhood and loving family.

“We had a great church,” Janie said. “I always knew I was going to do something big for God. I loved Jesus so much.”

But when Janie was 10 years old, her parents separated.

“We were busy, busy with God,” Janie said. “They were busy helping other people but they forgot about themselves. The vision that I had of God began to switch. That He is a judgmental God. The vision of God was “If you are a loving God, then why do you let such bad things happen to good people?”

A few months later, Janie’s parents reconciled. They decided to travel full-time as evangelists but Janie hated her new life on the road.

“My childhood from that point on was hard because everything that I had known was crumbling,” Janie said. “I began to comfort eat. It was the one thing that would be there when everybody else left. I was 200 pounds at 15, 16 years old.”

At the age of 15, while her parents were preaching at a revival, Janie was raped by a boy her age. For years, she kept it a secret.

After five years on the road, Janie’s family settled down in a small Texas town. Janie plunged into the party life.

“I began to get in with the wrong crowd,” Janie said. “Then when I took my first hit of cocaine at 17 is when it was ‘over the top.’ The whole insecurity faded. And, this is what caught me with the drugs, because it completely took away the reality of what I thought about myself. But, as soon as the high faded off the insecurity came right back. So, I was hooked, my first hit and I was hooked.”

While her drug use was rising, Janie’s weight was plummeting.

Janie’s family was grieved over her addictions, but their efforts to pull her out were futile.

“They would try to do as much as they could to pour Jesus into me the time that I would be home,” Janie said.  “They would put on Christian worship music when I would come home and I would clean up for a day, and there I’d go. I can remember my dad being in the driveway with tears pouring down his face because he knew he wouldn’t see me again for months.”

By the age of 22, Janie was a high profile drug dealer with 17 warrants out for her arrest.

Janie eventually served 18 months of a 5 year prison sentence. But, less than a year after her release, she violated her probation with alcohol and drug use.

“On Dec. 18th was my hearing for me to go in front of the judge,” Janie said. “She looked at me through her glasses and she said, ‘I am confining miss Burkett to the Texas Department of Corrections for 40 years.”

“I was transferred back to the Women’s State Prison to serve out my 40 years,” Janie said. “I remember looking out the window, seeing all that was before me, it was just me and Jesus…me and the Savior who died for me.”

“And I said God, I have made a mess out of my life,” Janie said. “I said if you can take this broken person and make something good out of it, then do it. And I ask you Lord, that if it be your will, would you please overturn this sentence? But if not, then give me grace to accept the fact that this is where I will spend most of my life and give me peace and love to do it.”

At the same time Janie and her parents were praying for a miracle, the judge who sentenced her resigned. Soon after, Janie received a letter from her mother.

Janie asked the new judge to send her to a Christian rehab program called Teen Challenge.

“She came out and she said, ‘If I could give you a 60 year prison sentence and probate it, I would because what you did was wrong and unacceptable with this court.’ She said, ‘however, that would not be merciful nor would it be compassionate. What I am going to do it probate that sentence, that you go to Teen Challenge, you complete the program, and you make something of yourself. ‘”

“I saw a God that day that loved me,” Janie said, “Not a judgmental God. Not a God that is going to throw you away because you are worthless, but a God that makes broken things new! I saw a God who loved me more than I loved myself.”

“I went in basically dead,” Janie said, “a dead person with skin and bones and the Lord was transforming me this 13 months.  I graduated at 135 pounds. I had finally completed something in my life and God had given me a new start. And I looked in the mirror and I saw somebody completely different. I saw my hair was fuller and my eyes were beautiful. I didn’t see fat anymore. I saw who God saw.”

Today, Janie is drug free and has completely reconciled with her family. She is also a full time speaker and has written a book called, “Unshackled.” 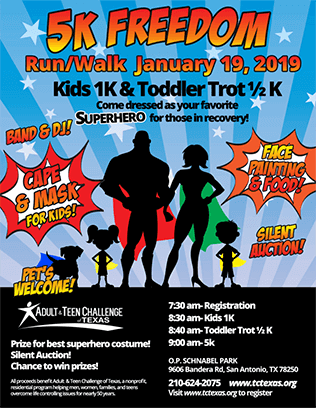 “Adult & Teen Challenge is one of the most successful programs in our country.”

“Adult & Teen Challenge works. It is effective; it is literally changing the lives of Americans from every walk of life.”

Founder, Focus On The Family

“Adult & Teen Challenge has a far better record of dealing with people in difficulty than do the bureaucrats.”

“I truly admire Adult & Teen Challenge because of its loving, life-giving assistance to individuals who are bound by life-controlling addictions.”

“Adult & Teen Challenge is one of the most successful programs in our country.”

“I truly admire Adult & Teen Challenge because of its loving, life-giving assistance to individuals who are bound by life-controlling addictions.”

“I have not seen a more effective organization in leading hurting people to life transformation.”

“Adult & Teen Challenge is doing the job that others only talk about.”